I'm just remembering the *ICE* statement from the movie Cool Runnings as they are shown what a bob sled does.-lol.ICE!!!! BARB take back your ice-burg!! OMGosh it's ICY cold and the cold front that brought so much rain to Cape Town and surrounding areas is now HERE- and I'm a real WOES!!- I hate the cold- you should see what I look like at the moment, I have three jerseys on!- and I can't move my elbows so well- LOL, sort of look like the overstuffed robot man! BWAAHAHAHAHAHA- a pink one at that too!

Nathan is excited as he is off to Rhodes early Thursday morning! Yeah he just gets home with enough time for me to do all his washing-lol. And they have this marathon in the snow there!- ( Don't know if you remembered me telling you last year how he went door to door looking for a hot shower-ROTF)- well it's the same trip.

I think I'm going to have to buy my child a better camera now- he is starting to *experiment* with his shots from all his trips and has taken some AMAZING photos which he shared with us last night. I've taken a few from the story he told me that had me in giggles and love how he captured the humour in them too- 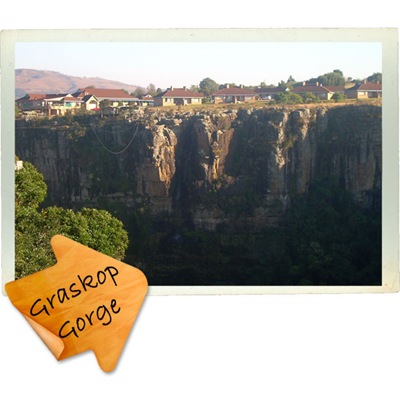 This was on the way to Kruger National park- and they camped on the edge of this gorge! If you look at the top left of the photo you will see a *bungy style swing*- UHUM, yeah! 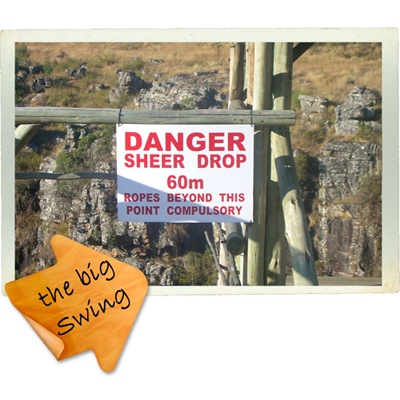 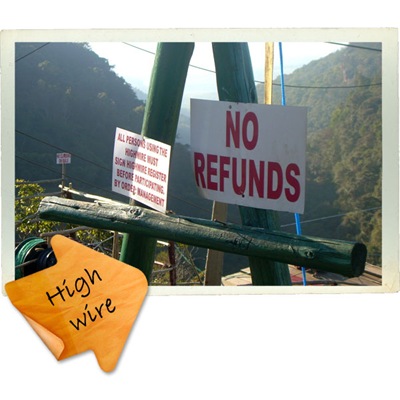 Once you are behind this point - Well there are NO REFUNDS on your money- so I'm sure you have to be VERY SURE that you want to throw yourself off this cliff hanging on a piece of wire! 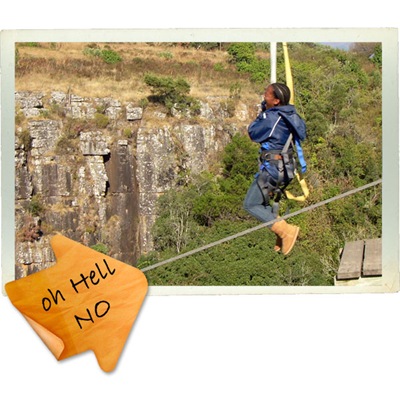 MOUTH WIDE open in a scream- LOL, Nathan did this wire run and loved it- but he did say that it is so high it takes your breath away for a few seconds. 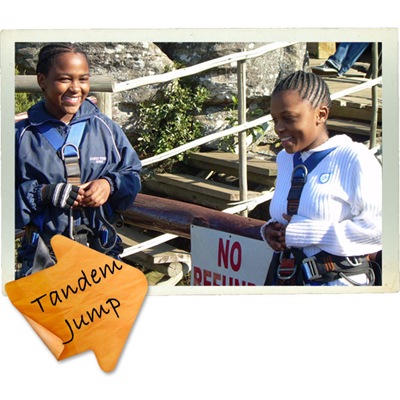 they attach both of you to the end of the elastic! Just look at their faces here- all smiles right-lol 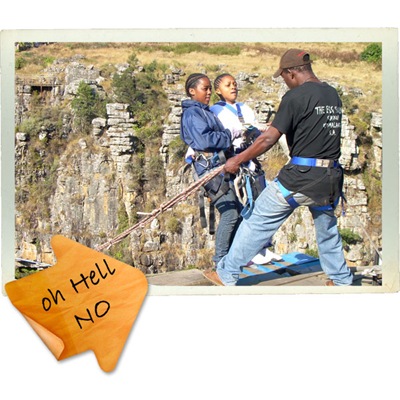 HAHA- Not so much anymore- OMG_ they are NUTS! The funniest was Nathan telling the story- they were yakking and laughing until they had to lean back like that- then the guide lets you go-and he said there was a WAAAAAAAAAAAAAAAAAAAAAAAA, SILENCE- lol. 2 second dual scream and complete SILENCE- then a few seconds later as they hit the bottom of the swing arc a HUGE SCREAM again. But this one lasted until they stopped- hahahaha.

Rather them than me! I would do the slide with NO PROBLEM- but hanging BACKWARDS like that would have me more than pee-ing in my pants-KWIM!

Thought you would enjoy these and I will show you some more of his trip tomorrow.

I used Bunny's awesome Phototrims for the frames and my freebie arrow.

Going to go get him some more thermal underwear now ( he is sure going to need it-LOL). Until tomorrow , Hugs and loves Kim

arggg I know!!! I am sitting here freezing!! I am seriously considering even wearing gloves while I play on the PC!! It's getting that bad! Last night I went to bed with long socks up to my knees, a shirt, two jerseys, a down duvet, a quilt and another quilt and I was STILL cold!!


I would never bungie jump, I am a total woes!! (to use your word!!) haha. Nathan's pics are cool!

OhKim, I am right there with you. OH HELL NAW (with that Southern drawl) Now why would these goofs (yes, Nathan included) jump off a perfectly good piece of STABLE land into nothing? *shakes head* Those pics alone made my stomach jump. lol
And yes, you do need to get Nathan a good camera..his pctures are amazing!!!!!
Oh, and umm Kimmypoo...it's supposed to get up to 82 here today. Wanna come stay here til Winter & we get snow? lol MWAHS LOVE YA

It's plenty HOT here in Texas-I wish I could bottle some of it up and send it to you in exchange for a little cool air (might save on my OUTRAGEOUS electric bills.) Central air is great and I wouldn't want to live without it, but gets awfully expensive in the summer. The pictures and your commentary on them are, as always, very amusing. You blog always gives me a reason to laugh and come back for more.

GO!!!! Nathan and all his friends. I love extreme sports. Stunning photos - you have a budding photographer there mom.

While you're at it, can you get me some thermals too please. We're freezing our butts off here. It's yime to hunt out that RICH husband. You, me, Bonnie & Jenni can share him LOL.

Nathan has taken some good piccy's, they look well proportioned and interesting shots too, a new camera sounds like a good investment, just think of all those extra layouts you'll have to scrap, hahahaha!

Great pics and story behind them. I'm with babydoe and would send you some of our heat in exchange if I could!

The Gorge is a BEAUTY!! and i LOVe the story and pictures about the bungy! lol oh to be young and so full of courage! :D Hope he takes LOTS of pictures with his next adventure! (sending an extra hug for warmth!) Hope you have a WONDERFUL day! :D

you know that the cold weather will be heading our way soon. and you KNOW that we woos natal people get cold for nothing. i mean, when its 9 degrees here we hide in our houses and wonder if we reaaaaaly have to go to work.. best thing i did for myself this year, was buy my own duck down duvet.. LOOOOVE it. my mom emailed me pics of the cape, flip i am glad i dont live there now!

oh and yeah, with bonnie, less on the bungee...

*squeek, squeek, creak* ... thats th sound of the big rope pulling the BERG back from ur coastline, my friend. Sheesh, no happy medium for ya, hay? Its just a little 'ol berg. Get ur booty moving sweet thang, you'll heat up fast enough ROTFL. Bet you dont' bees cold when ur are in party mode, adancing? haha!

Just wait for menopause, you'll want that burg then NOT all within 5 mins hahaha.

GULP - ur son was camped WHERE? Good fing Mom couldn't see in 'real time' or hers wooda been in panic mode.

Great photos Nathan got. Looks like huge, scary fun. How come
kids are not scared to do this but are scared to do dishes, ride the lawnmower etc?

I finks boy NEEDS camera, ur can send him on *blog missions* then, for photos? haha Make 'im EARN it.
I say. Mean ol me.

squishes to warm ur up!

That gorge is beautiful!!! Funny story about the girls! h ahaha

I am a baby when it comes to very cold weather!! Keep bundled!